From table to landfill, food waste is hurting the planet

And Newfoundland and Labrador is behind with solutions

When you throw food into the trash, you don’t generally think about where it will later end up.

When you throw away organic waste such as uneaten or outdated food, you are contributing to a global problem that is not only costing the world billions but also harming the planet.

A report released by the Food and Agriculture Organization of the United Nations suggests humans waste $1 trillion U.S. in food annually across the globe. This means approximately one-third of all food produced for human consumption is lost or wasted.

Canada contributes to the chaos, wasting approximately $31 billion in food each year, according to a 2014 report from Value Chain Management International. It’s an issue that some provinces have begun to tackle but that others such as Newfoundland and Labrador are a little slower to confront.

“It is something that’s important that needs to be dealt with,” said Ian Duffett, director of municipal infrastructure and waste management in the Department of Municipal Affairs and Environment. “Right now we don’t have organics processing anywhere, really, other than some small scale commercial stuff that some farms operate.”

The province is actively looking for a solution for organic waste through the Provincial Solid Waste Management Strategy, which was released in 2002. The primary goal of the strategy is the diversion of 50 per cent of solid waste form 2002 levels by 2025.

According to the ReThink Waste Newfoundland and Labrador website, about 30 per cent of all waste in the province is organic. When food waste is buried in a landfill and deprived of oxygen, it decomposes at a much slower rate and produces a toxic liquid leachate that pollutes water and soil. The decaying food also releases a greenhouse gas - methane, which is estimated to be about 23 times more harmful than CO2.

Duffett said it is important for Newfoundland and Labrador to focus more on organic waste management in the future because of its hazardous effects on the environment. 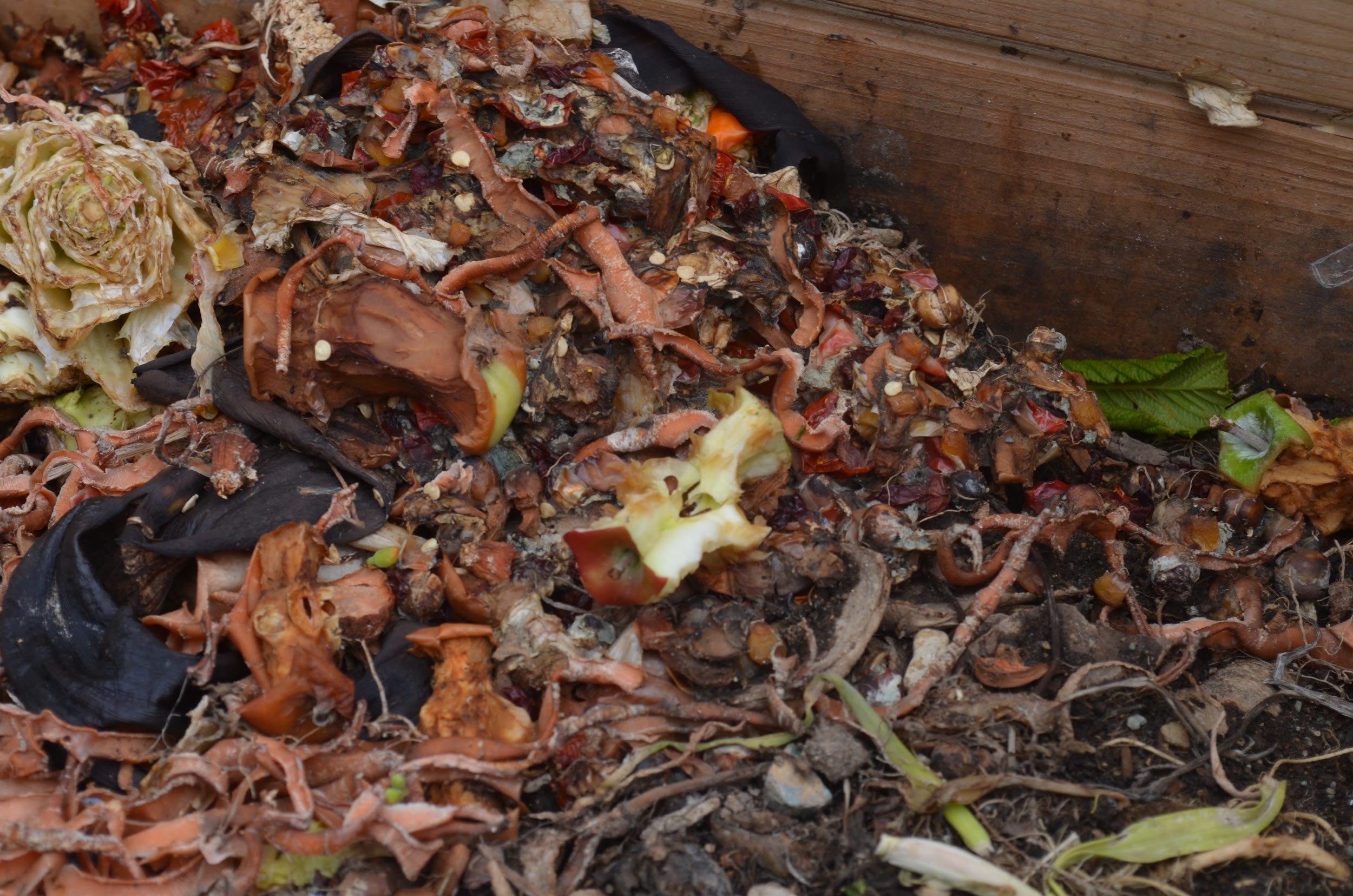 About 30 per cent of all waste generated in Newfoundland and Labrador is organic, according to the RethinkWasteNL website. Photo by Victoria Plowman

If we can’t deal with the organics then we will struggle to meet the 50 per cent diversion goal.

“In 2014, Dillon Consulting did a report on organics, and that outlines kind of what we are going to do with the organic waste.”

The report covered both large and small scale organics in Newfoundland and Labrador, as well as possible solutions for processing them. Each region is responsible for developing its own solution, with assistance from the government, Duffett said.

The Western region, for example, is looking at sending its organic waste to a private operator who may want to sell it as compost or create electricity, while the Central region is looking at a traditional composting facility.

“Some of it is evolving I will say, even now,” said Duffett. “At the end of the day, it might end up being a bit of a mixed solution, depending on what’s suitable for the region based on their generation, their population.

In the Newfoundland portion of the province, there are seven regional waste management authorities. But what works for one may not work for another, Duffett said.

“We are still working on it. But the reality is if we want to hit the 50 per cent waste diversion we are going to have to, at some point, get into the organic side.” 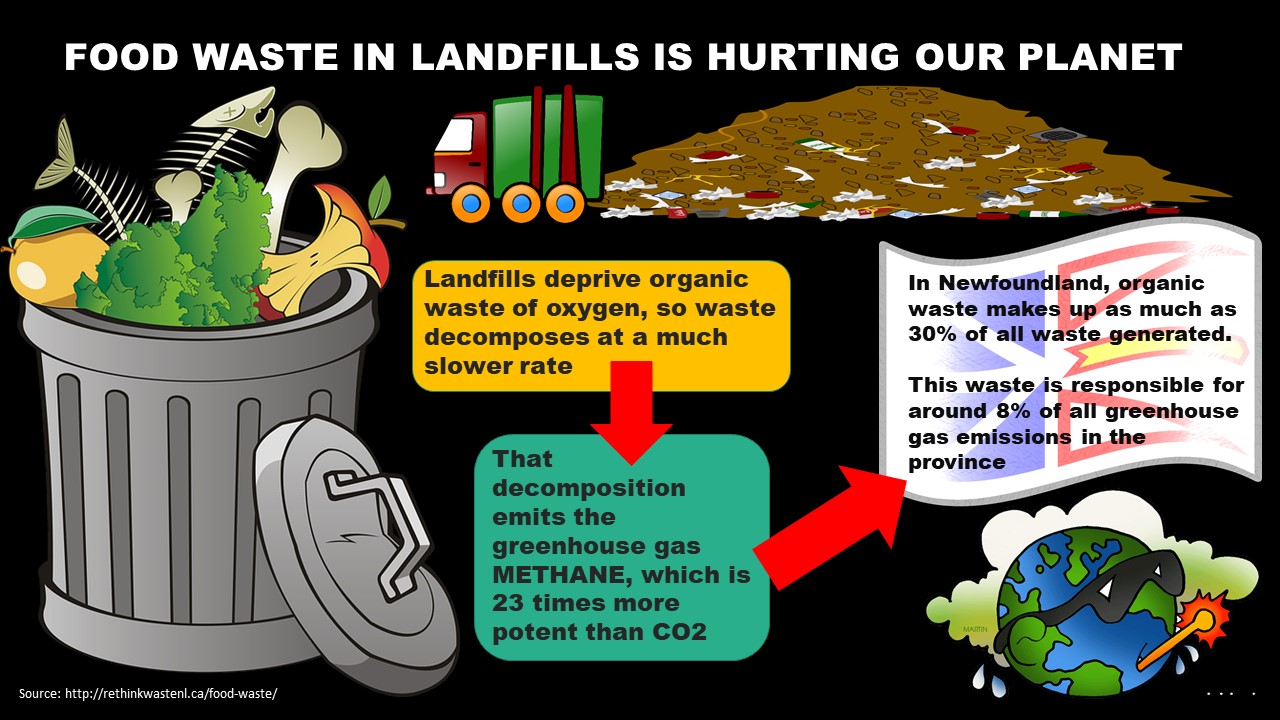 One school in St. John’s is doing what it can to combat the issue of food wastage at the root of its main cause - the kitchen.

Chris Peters, a teacher at St. Bonaventure’s College, has been in charge of the school’s gardening and composting program since it began 10 years ago. 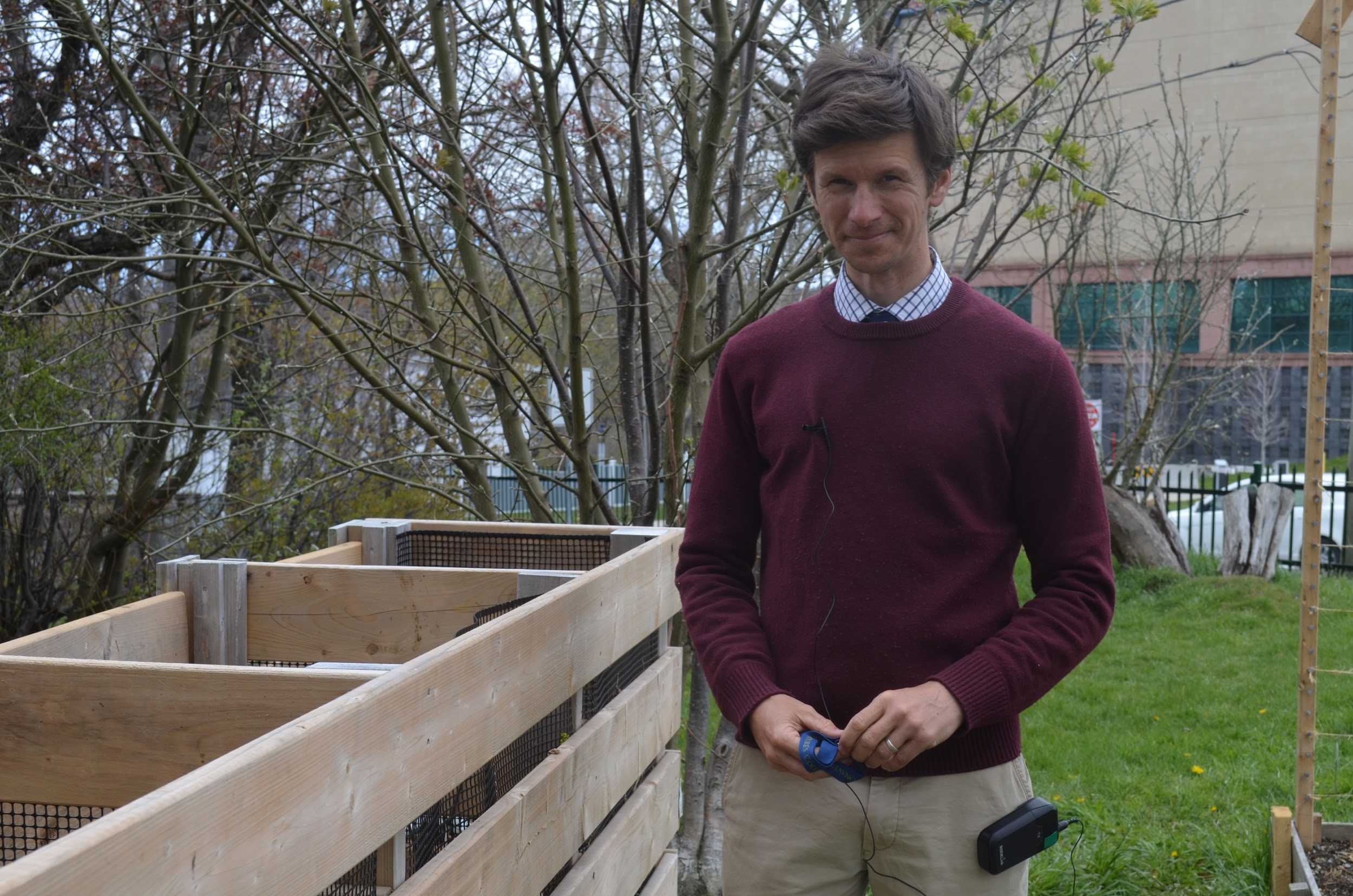 Chris Peters has been in charge of the gardening and composting program at St. Bonaventure's College since it began in 2008. Photo by Victoria Plowman

“It just kind of came together as one of these magical moments where everyone was on the same page with it,” Peters said.

Outside the school, just next to the soccer field and nestled between some trees, Peters gestured around to the eight wooden garden beds built neatly on the cool grass beneath him. He explained how his volunteer students are currently growing potatoes, asparagus, strawberries, beans, carrots, onion, garlic and peas in the garden beds, as well as other greens and herbs in the school’s greenhouse.

When the food is ready to be harvested, it is collected by younger students and brought either to a local food bank or to the school’s cafeteria to be used for meals.

At. Bonaventure’s College was also the first school in Newfoundland and Labrador to adopt the Farm-to-Cafeteria program, according to Peters. The food that they grow in the garden this year will be harvested for use in that program in the summer or the fall.

“I think we’re struggling a bit right now with trying to get students to see the point,” Peters said. “It’s just something that happens right now, you know, it’s something they learn about in class, but unless it’s something they do at home they don’t necessarily catch on to the connection between here,” he said, pointing one hand to the garden bed, “and here,” following with his other one towards the composter.

MMSB provides a myriad of useful information about food wastage in Newfoundland and Labrador.

Within the gardening and composting program at St. Bonaventure’s College, students are exposed to the risks and the benefits associated with food wastage at an early age.

In terms of who does what, Peters explained that grades one and two planted seeds this year, with grades six and 10 regularly collecting compost from the cafeteria and other grades helping out in a variety of different ways.

“We have some hangers-on kids that are just curious about it, so we do have a spectrum of kids involved,” Peters said.

“Right now we’re at eight garden beds and we’ve got a pretty committed core, so we feel reasonably confident that we’re going to be good going forward.” 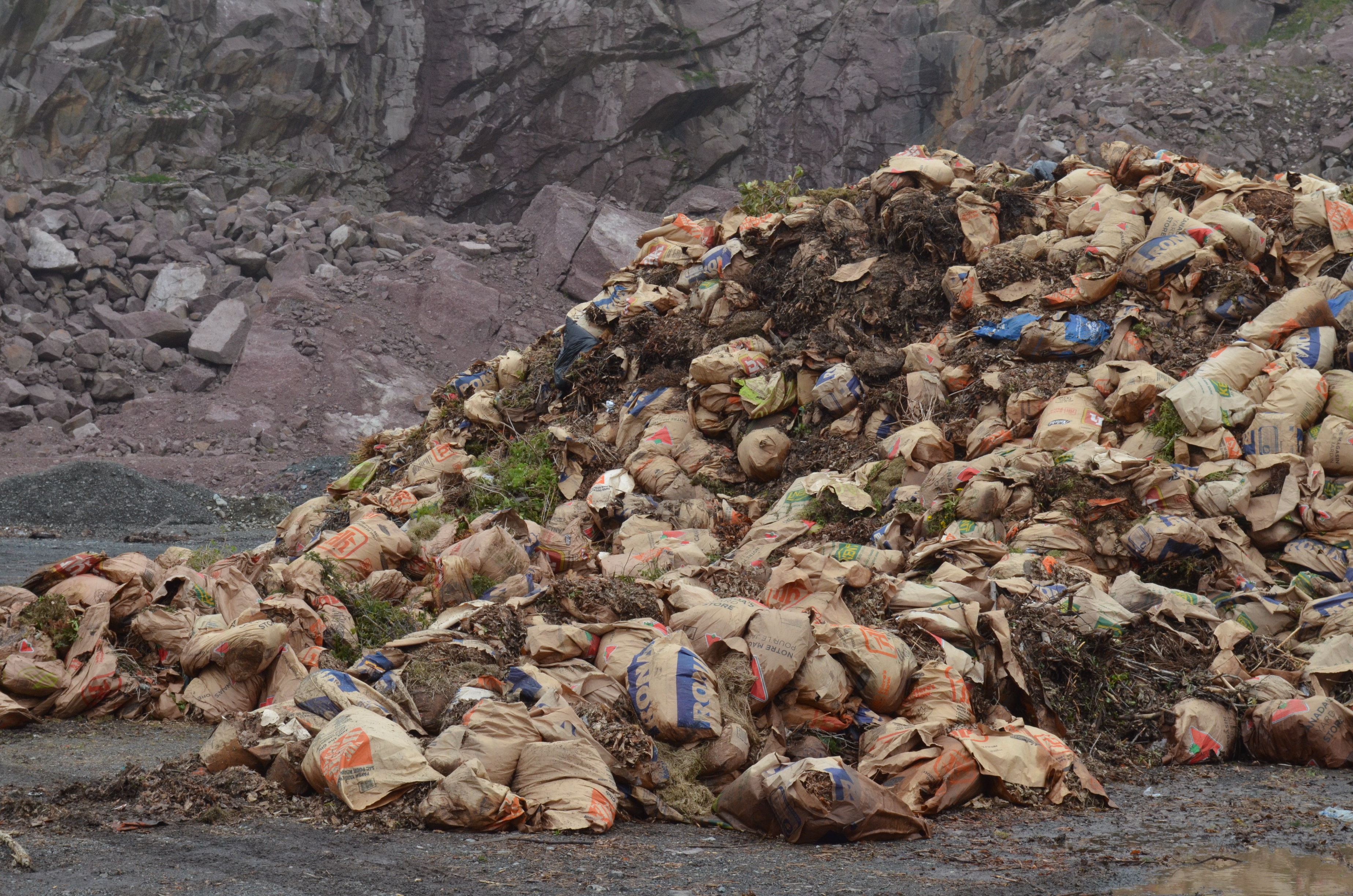 The St. Bon’s Farm-to-Cafeteria program is making a difference, but it will take more than school composting programs to significantly reduce the greenhouse gases produced by food waste in Newfoundland and Labrador.

Duffett is confident when looking at the bigger picture - a provincial plan to tackle organic waste, with sights on the goal of a provincial composting plan by 2025.

The question, according to Duffett, is whether to have one big facility to deal with organics, or multiple smaller facilities with transportation to one of the province’s host facilities – in the eastern region Robin Hood Bay, and in the central region Norris Arm North.

“I guess that will be driven by economics, and the operational decisions of the regions themselves, but we will be there to support them with the Dillon report as a basis,” said Duffett. “But I do think there’s solutions that can be done at a local level at a much lower cost.”

That cost, Duffett said, largely depends on the economy being serviced.

“The larger the population you can service, the lower the unit cost to deal with that waste is,” he explained.

The question that must be answered, Duffett said, is ‘which is cheaper’? Operating a landfill within a smaller area or transporting the waste away?

“Once you put a cost to something you change people’s activities,” said Duffett. “Across the world, it’s becoming more and more costly to deal with your waste, so people come up with more creative solutions to divert it.”

“The chosen technology in plan when we developed the strategy in 2002 was landfill plus compost plus recycling facilities, but now we’re looking at other technologies,” Duffett told Kicker. “An example is that Robin Hood Bay (the regional landfill on the Northeast Avalon) has gone the way of landfill gas capture. So obviously in order to trap the gas, the organics have to go to the landfill to create the gas.

“Robin Hood Bay is still only two-thirds capped, so that means that essentially gas is trapped in two-thirds of the landfill. They don’t have the highest gas capture rates because you know, they came in after the fact to try and create it, which was smart but if it’s planned from the very beginning you get a much better capture rate,” Duffett said. 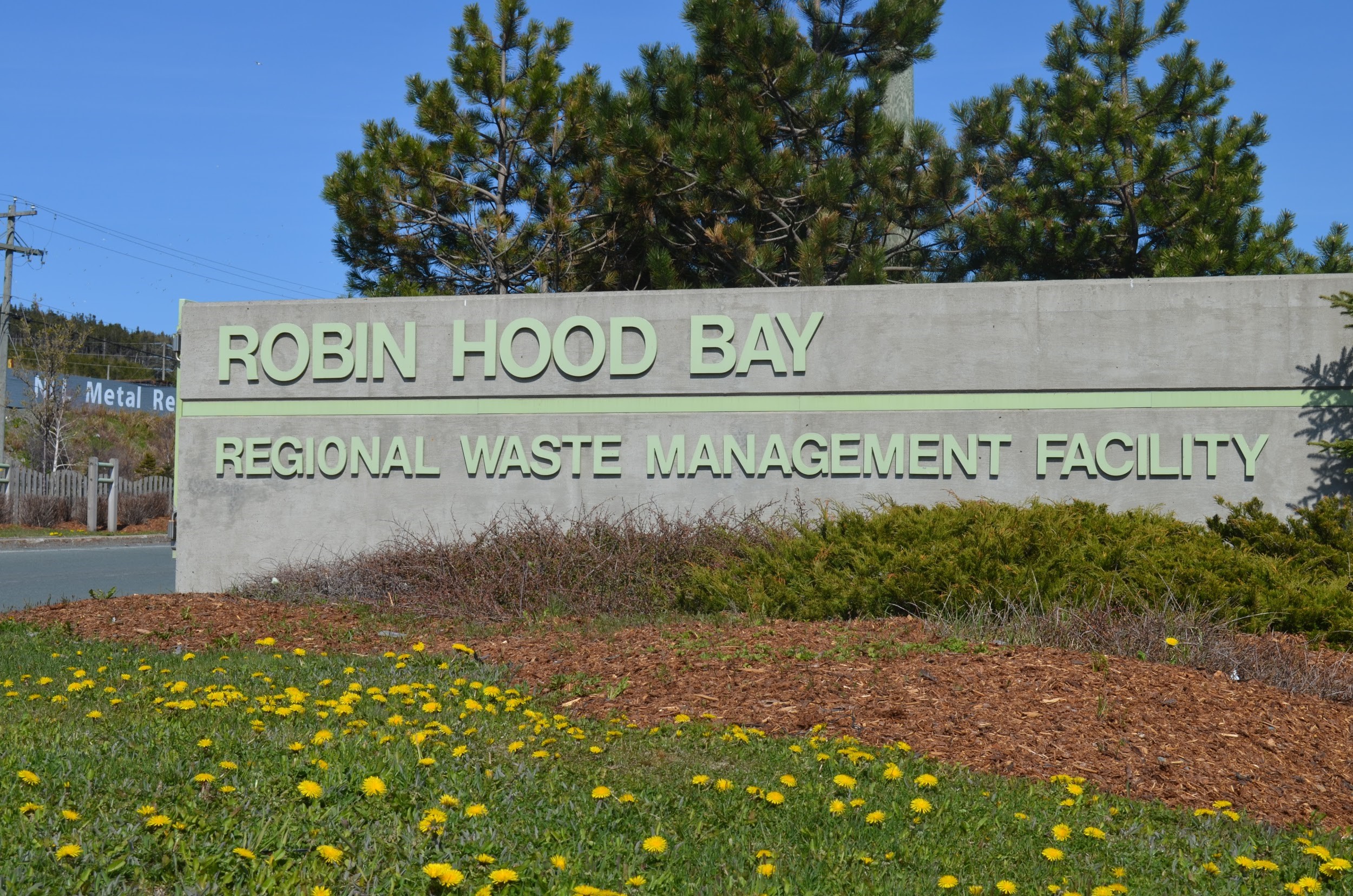 The Robin Hood Bay dump in St. John's is home to the methane-capture program and will also serve as one of the province's regional host facilities. Photo by Victoria Plowman

The Newfoundland and Labrador GreenFund website describes the system as an underground pipe network that leads to a compressor and flare that will burn off the methane as it reaches it.

“The Robin Hood Bay landfill emits approximately 130,000 tonnes of GHGs per year, representing approximately 1.4 per cent of the total greenhouse gases emitted in Newfoundland and Labrador,” the website states.

Duffet says the government is waiting to see what a solutions study might say about viable technologies for the province.

“If gas capture turns out to be viable, then it may be a situation where we do need the organics to go into the landfill," said Duffet. "If the long-term solution is incineration with electricity generation, then again the organics will go to that process and be burnt essentially to create electricity.

“There’s a lot of social and economic and environmental aspects of something like that, and that’s part of the environmental assessment process as well. It’s not a simple piece of work.”