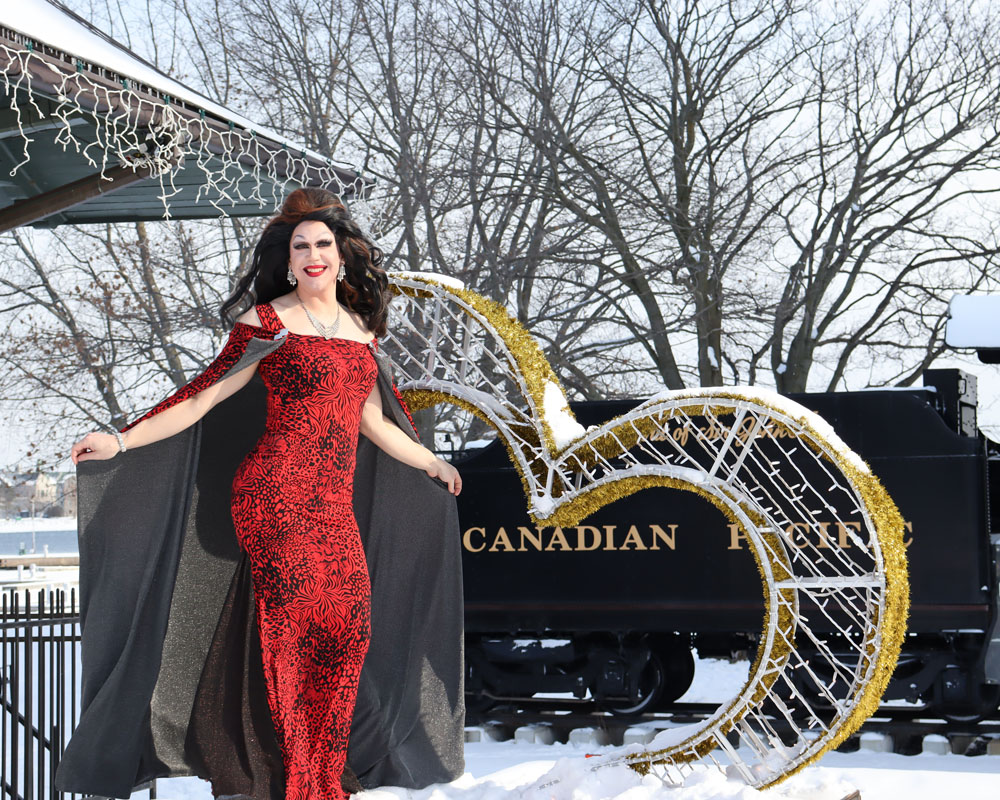 Rowena Whey in downtown Kingston all dressed up and ready to sing. She’s looking forward to introducing drag to new people this Valentine’s Day. Anna Stafford/Kicker

With no gay or drag bars to perform in, one Kingston drag queen is taking her show on the road, well, to be more accurate, the driveway.

“We take what we can get,”  Rowena Whey said.

She plans to make an unusual Valentine’s Day a little more exciting for Kingston, Ont., couples by spicing things up with driveway drag performances.

Kingston, a town of approximately 136,000, is better known as a university town and home to the Tragically Hip than being a hotspot for drag queens.

Couples stuck at home because of COVID-19 can order one of these “drag queen candy grams” from  Whey, or send one to a friend, for $27.54.

Whey says she’s looking forward to some in-person performances, but she also hopes the event will expose more people to drag.

“The more different places and different people I can reach the better, not only for me as a performer but also for the queer community,” Whey said.

The response to the drag queen candy grams, says Whey, has been “overwhelmingly positive.” Instagram pages across Canada have even shared the idea, she says.

She’s sold five performances so far, one third of the spots she has available.

“A lot of prejudice is about ignorance, and anything that exposes people to an alternative artform is positive.”

Christian Démoré ordered one of the candy grams for him and his wife. He says he’s never seen a live drag performance before, but the couple are big fans of the show RuPaul’s Drag Race.

He also says he thinks the event could help normalize drag.

“A lot of prejudice is about ignorance, and anything that exposes people to an alternative artform is positive,” he said.

Whey’s brother and sister-in-law ordered one of her kid-friendly candy grams for their young family. They have daughters who are two and four years old.

Caitlin Burns, Whey’s sister-in-law, works at the Canadian Cancer Trials Group and her husband is an accountant. She says she thinks the event could “open the door” for conversations with her children about gender and sexuality.

“It’s a really wonderful opportunity to expose children at a young age to diversity …,” she said.

Burns has attended other drag shows in the city, but Démoré says he was only “passingly” aware of the drag scene in Kingston, until he saw this event on Facebook.

“In Kingston I get to see it build, I get to nurture the community, and I get to help other queens and other performers have shows.”

Whey has been performing in Kingston for three years. The Kingston drag scene is small, but she likes having the opportunity to make the queer community more visible.

“In Kingston I get to see it build, I get to nurture the community, and I get to help other queens and other performers have shows,” Whey said.

Whey says there are about 10 to 15 drag queens or kings who regularly perform in Kingston.

While there are no actual gay or drag bars in the Ontario town perched at the mouth St. Lawrence River, there are queer-owned and queer-friendly businesses. Those businesses, says Whey, support the drag community and allow them to put on shows there.

One of those places is Spearhead Brewery in Kingston’s west end, where Whey regularly performs.

Morgan has been doing drag in Kingston since 2000, and spent several years as the only queen in the city. She says more people in Kingston started doing drag after RuPaul’s Drag Race TV show came out in 2009.

“It’s not just this underground art form – it’s an art form. And I want people to appreciate that.”

Morgan likes performing in a small city like Kingston. The drag scenes in bigger cities can be competitive, she says, but in Kingston it feels more like a community.

“We look out for each other,” she said. “We’re trying to help each other.”

Whey wants to increase queer visibility with her candy grams, but she also wants to show people that drag takes talent.

“It’s not just this underground art form – it’s an art form. And I want people to appreciate that,” she said.

A Kingston-based charity is opening a new thrift shop downtown with the help of a generous grant from a Queen’s student club.

The Quebec lockdown and curfew has had an impact on people

For two mental health professionals, COVID-19 has posed problems. But they’ve found solutions.   Since the beginning of the COVID-19 pandemic, the demand for mental health services has increased Counsellors Valerie St-Gelais and Dr. Betty […]