Dominion workers hold fast on picket lines as the strike drags on. 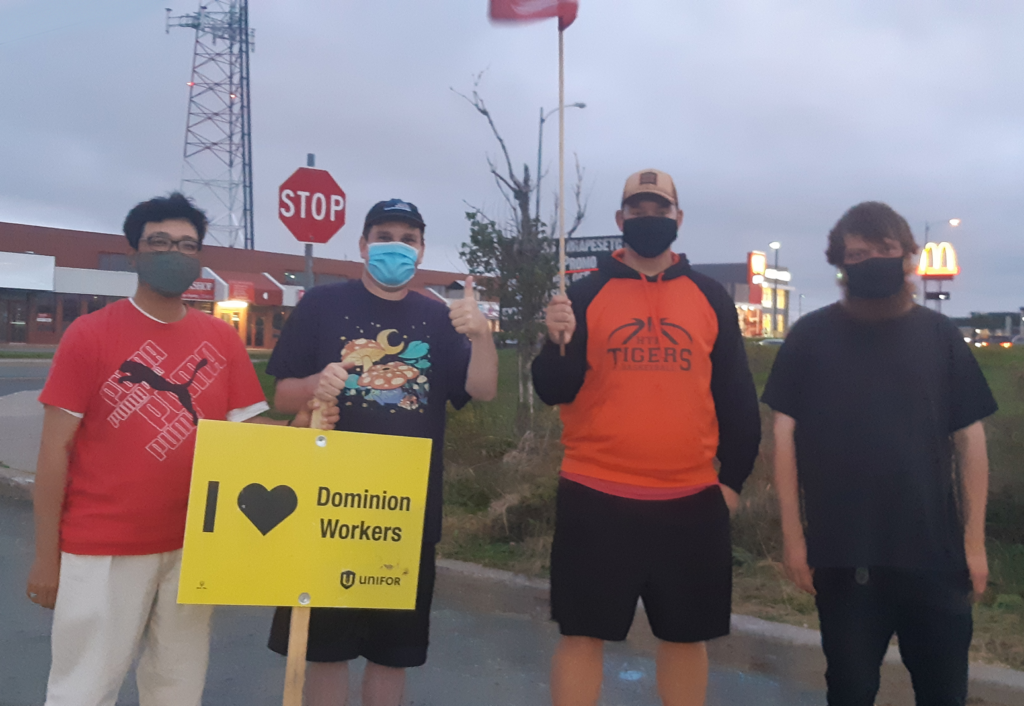 Picketers at the Stavanger Drive Dominion in St. John’s have weathered long days and nights on the picket line. The workers say they aren’t ready to call it quits yet. Mark Quilty/Kicker

Car horns have been the loud, honking soundtrack to the Dominion on the corner of Stavanger Drive this fall.

Dominion workers have been outside the store picketing for over a month now. On Aug. 22, Unifor Local 597 members voted to strike, closing all 11 Dominion stores in Newfoundland and Labrador. Now, a month later and with negotiations still deadlocked, striking workers are having their resolve tested.

The strike came as the result of a perfect storm. Contract negotiations came to a head as Loblaw and other grocery chains retracted a $2-an-hour COVID-19 wage increase.

“When the COVID crisis was just beginning, we put negotiations on hold,” says Chris MacDonald.

MacDonald is Unifor’s lead negotiator for Dominion workers in Newfoundland.

Dr. Lynn Gambin, an economics professor and labour researcher with Memorial University in St. John’s, says the pandemic has changed the conversation on labour.

“The pandemic has given a voice to workers who before were taken for granted,” said Gambin. “But that’s not to say this is a good situation. Nobody wants to go on strike. People generally want to work, they like to be productive. But they want good treatment as well,” said Gambin.

Removing the $2 hourly increase isn’t the only issue Unifor members have with Loblaw. In 2019, the company cut 20 per cent of its full-time jobs, turning those positions into part-time.

At one time, said MacDonald, the positions were closer to 80 per cent full-time.

“… The grocery industry was a good place to work,” said MacDonald.

The Dominion strike has had side effects on the city’s other grocery stores, according to Sobeys deli employee, Evan Young.

“We’ve had to double up on [food] production,” said Young. “It’s been busier, yeah.”

Sobeys employees in Newfoundland and Labrador aren’t members of any union. Despite the increased work caused by the closures, Young still sympathizes with the Dominion staff.

“I’m not surprised that stores have removed the $2 COVID-19 bonus,” said Young. “An extra two bucks may not seem like much, but it adds up. And when you take something like that away, it just shoots down the morale of the whole store,” said Young. “They already work hard enough for less.”

The public in Newfoundland, says Gambin, seems to have sided with the workers.

“In our province, I don’t think there is an appetite for Loblaw to go breaking picket lines [with non-union workers],” said Gambin. “People are getting their groceries from elsewhere. It would be negative PR for Loblaw.”

MacDonald is thankful for all the support given to Dominion workers in the province.

“I’ve never seen support for labour like this,” MacDonald. “This is community in Newfoundland. The public understands. Loblaw and Dominion have taken a hit now. They know what kind of damage this strike has done to their brand in Newfoundland.”

As October looms large and the strike continues, MacDonald is still hopeful that an agreement can be reached.

“We’re always doing what we can to get the company back to the bargaining table,” said MacDonald. “But we’re in for the long haul.”

Loblaws did not respond to an interview request.

Newcomers agree that Newfoundlanders know how to get through an emergency.

From the ashes of cancelled Raw artists showcase, a revolution is born

Natural born artists are banding together to put off their own artistic showcase to replace the now cancelled show.

The Quebec lockdown and curfew has had an impact on people