Like the Grinch came to find, Christmas doesn’t come from a store, the holiday means so much more.

The halls are being decked and Christmas trees are glistening. Houses are adorned with thousands of twinkly lights, and Katelyn Smith is playing Santa Claus.

Smith is a child and youth-care worker at group home in St. John’s who goes above and beyond her job requirements. After seeing a little girl arrive at her work with no underwear, she decided she needed to do more.

“I see a lot of kids come into the place where I work and they have nothing,” said Smith.

One day, Smith says a little girl appeared with a suitcase the size of a lunchbox. It was all she had, that and the clothes on her back.

While giving back during the holidays is a great way to get into the Christmas spirit, said Smith, being fortunate enough to help someone going through a tough time feels good all year round. 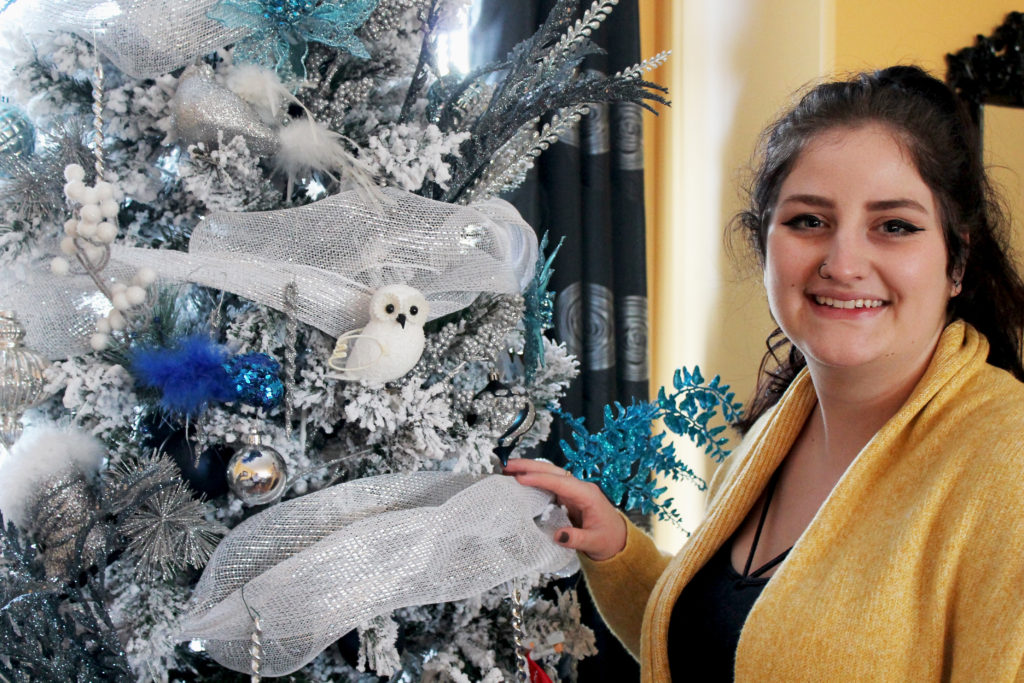 Katelyn Smith has wanted to work with children who have experienced trauma for as long as she can remember. She went into the career because of experiences she witnessed throughout her life. Erica Yetman/Kicker

What she didn’t know going in was how deeply the job would impact her, and seeing a child come in with no underwear was a sad revelation.

“Everyone has underwear so it was pretty eye opening for me,” said Smith.

Smith decided she had to do whatever she could to help a little girl who didn’t even have the basic necessities. When she got home that evening, she posted on Facebook asking friends and family if they had anything to contribute to this little girl.

“That child changed my life pretty much because I found there was a need for children to have things like basic needs; things that you wouldn’t even think about,” said Smith.

Since that first Facebook post, Smith has had a steady flow of donations and contributions to help the children and families she works with.

“From there, I had an outpouring of stuff coming my way every week,” said Smith. “Anything you can think of: clothing, toys, books, makeup … Most of its brand new with tags, people forget about how much they have.”

Kassandra Drodge, 23, is a student living in St. John’s and studying online. Although she’s living on a student income she finds space within her budget to give back as much as possible.

“I think it’s really nice to let other people know that you’re thinking about them even in their darkest days,” said Drodge. “I feel like a big problem with today’s society is that people don’t take the time to empathize with others.”

Armed with $20, Drodge goes to her local dollar store on a regular basis to buy supplies to make up mini survival kits filled with things like socks, underwear, a toothbrush, and bottled water for those living on the streets of our city.

“I would like to think that most homeless people are only temporarily homeless, although that’s just wishful thinking,” said Drodge. “So it’s like a little pick-me-up package for while they’re down (on their luck) to take care of some basic needs.”

Smith’s goal was to help people and not only has she achieved it, she’s garnered a stockpile of clothes, toys and basic necessities. The kids she works with often appear with little or nothing but thanks to generous donations she was able to greet them with a garbage bags full of clothing in their sizes.

Smith says it makes her feel good to have the resources to be able to help as many kids as she can. She doesn’t just surprise them with clothes, though.

“Sometimes at night I’ll take toys out that they haven’t seen before and put them in the play areas and they’ll wake up the next morning like ‘where did this come from,’” said Smith. “So it’s cool, they love it and they’re really appreciative.”

With Dec. 25 just around the corner, the similarity between Smith’s actions and the jolly man in the red suit are undeniable.

“I am like a Santa Claus in my own way I guess,” said Smith, letting out a little chuckle.