In a timeless, three-storey house in downtown St. John’s, harsh light beams through closed windows. The floor is strewn with decorative flowers, fabric and copious amounts of craft glitter.
Kit Sora calls this home.
Sora said she always knew she had an unusual way about her that no degree of normalcy could counteract.
Sora, 26, said she was young when she first started dressing up. This love for playing pretend emerged into adulthood, as she now dresses up as fictional characters in an act called cosplay. She was even younger when she first began taking photos with her trusted Kodak point-and-shoot camera.
“I’ve grown so much with self-portraits,” said Sora. “When I was a kid I used to start by putting a barstool in my bathtub and then I had however many books I needed to get the right height and the camera would usually be balanced on a soap dish.”
Though Sora’s artwork was once makeshift self-portrait photography in her childhood bathroom, her current photography has its own group of fans. Her photos are enlarged and hung on the walls of the print shop where she works and will soon be on the pages of a book Engen Books, a Newfoundland based publishing company, is releasing later this year.
With wedding and client photography weighing her down, just a few years ago Sora decided that it was time to start her project, 52, to rediscover the root of what she loves – creative photography.
Without recognizing it right away, the project 52 took upon itself to portray a theme of mental illness. Sora would shoot a portrait a week that touched on subjects such as eating disorders, depression and stigma. While the project was extremely draining, she said it touched a lot of people and inspired the future photo project 52’17 and the one she is currently working on, 52 Props.

I had trouble reaching 25 and realizing that I am so far behind where I thought I wanted to be. Then the more I thought about it, I realized I didn’t really want to be anywhere.

Sora combines her passion for photography, cosplay and art with these fantasy-inspired self-portraits. Portraits that are sometimes taken while naked in the woods, knee deep in snow, or perched precariously on a rock near Newfoundland’s icy coast.
When an idea for a portrait comes to mind, she normally consults her equally artistic partner, Drew Power, to gauge how possible it is. Sora said that most of her adventuring is done with him by her side and he has a role in making her photographs come to life.
The two eccentric individuals co-own their house in the midst of the city and are responsible for all the unusual aspects that make it home. The skeleton wearing a pink wig that dines at the kitchen table and the eight and a half foot T-rex that resides in the living room can vouch for that.
Power said that since meeting Sora, the amount of glitter in his life has increased significantly. More importantly, though, so has the creativity.
“I’ve gotten a lot more creative,” said Power. “When it’s like 11 at night and she thinks of an idea and all the stores are closed so we have to figure out what we have in the house to make the idea work the way she wants it to work. So it’s just constant creativity.”
This creativity especially embodies itself when Sora crafts her cosplay.
Her closet is a mountain of mismatched clothing waiting to be worn as costumes. She finds solace in creating things and purpose in playing the part.
Sora has a particular love for Disney. If you were to see her in passing, you could probably make that assumption. Her pale pink hair and dresses made of tulle would make most little girls widen their eyes and beam at the thought of meeting a real-life Disney princess. 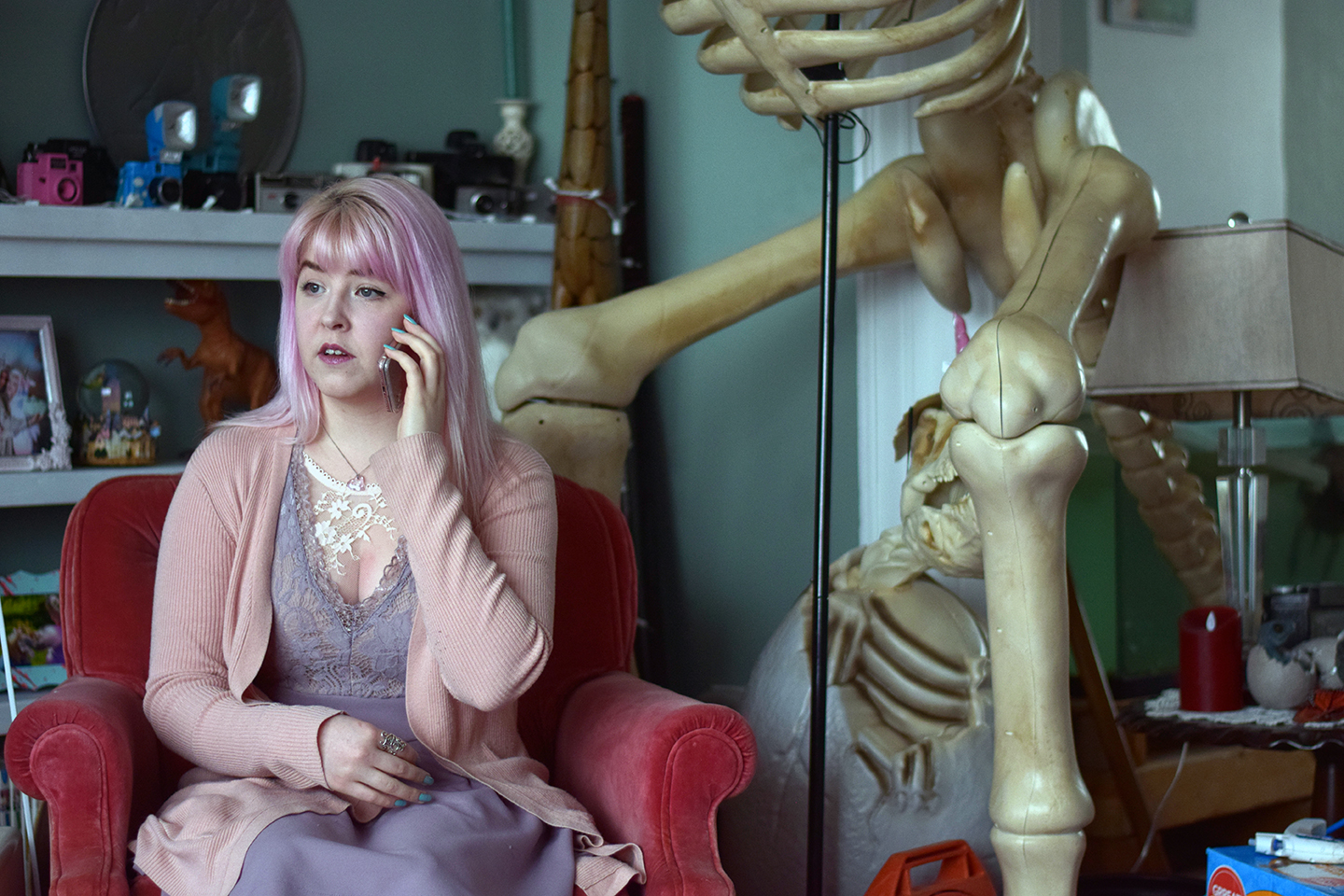 That utopian essence of hers is even more evident in her cosplay. Most of which involves wings, wands, or some other mythical prop.
Fantasy and art have been a part of who Sora is since she was a kid and would watch Star Trek with her father.
“It’s kind of what I always knew,” said Sora. “I could draw before I could walk.”
Before coming to terms with the artistic and unusual lifestyle that would be to come, Sora began her first year at Memorial University to seek something potentially normal. Her university pursuit began with social work. But, she said, that after spending classes crying in the back of the room, she soon realized her gentle heart couldn’t bear the weight of such an emotionally heavy career.
Self-discovery was a major part of her time spent at university. Sora said she would spend all hours of the night being fueled by creativity. She simply did not have time in the day to stimulate her imagination, and that part of her had no choice but to awaken when the rest of the world was asleep.
“I can’t just draw randomly,” she said. “Like, if I’m not in the right mood, or the weather is wrong, or the music is wrong, nothing is happening,” said Sora. "I’d get up at 1 a.m. and music would go on and my kitchen light would go on and I’d be painting until like 6 a.m.” 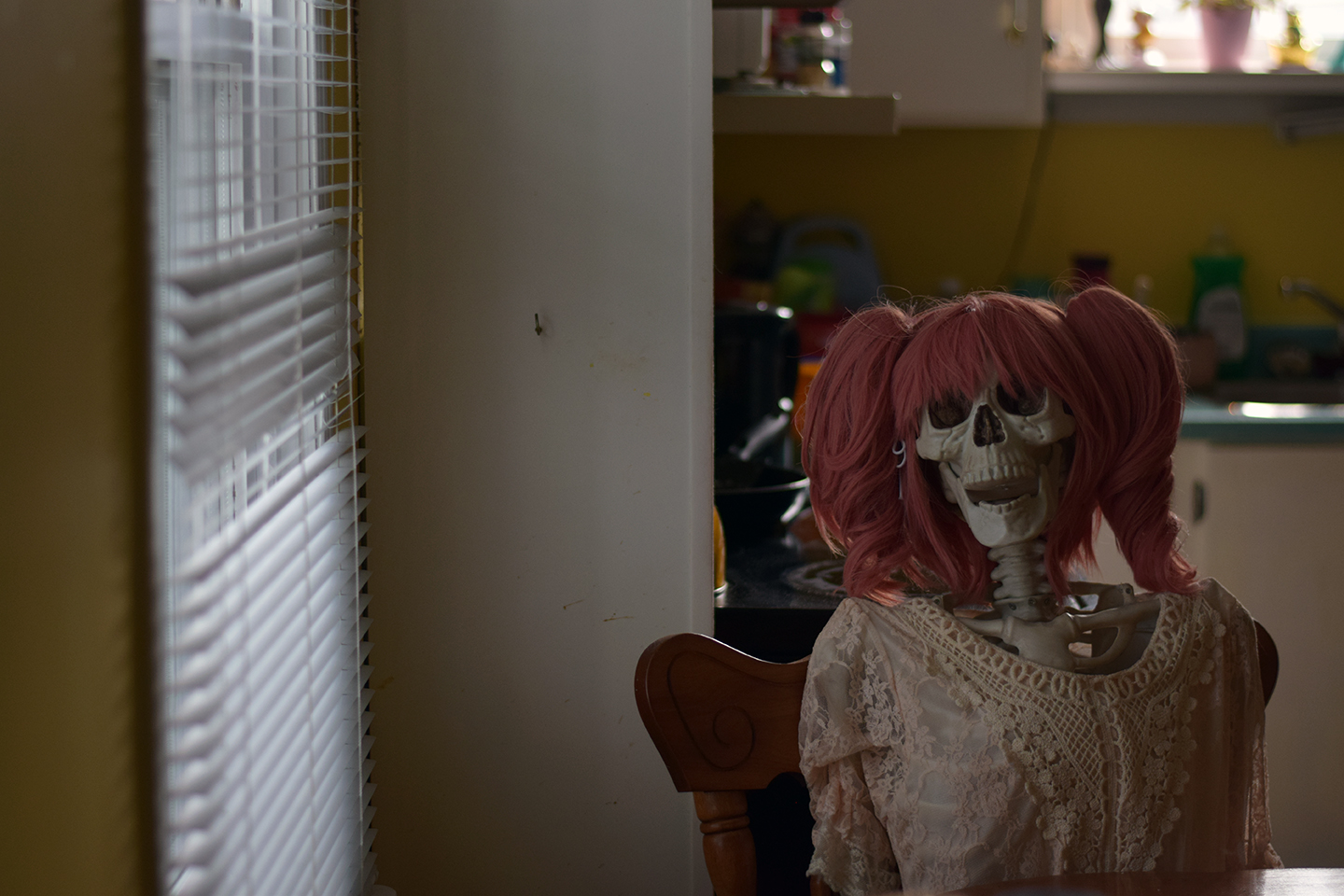 A skeleton always has a place at Kit Sora's kitchen table.

Growing up, Sora’s parents welcomed the madness for what it was. She said they saw something in her that was far from conventional.
“They’ve pretty well just accepted it as a thing. If ever I’m like, ‘Oh hey, can I borrow this or oh I need the SUV for the weekend’ they respond with, ‘Oh you’re not going to be naked in the woods again are you?’” said Sora. “They’ve always known I’ve been weird.”
Now she takes things day by day. Sora said she has never been the type to have her future mapped out and is more than OK with that. It’s a part of who she is.
Sora is content in her spacious, light-filled home fit for her, her partner, 3 cats, 2 turtles, 1 bunny and the teal piano that sits in her dining room.
It’s taking photos, dressing up, and playing the French horn in a brass band on Thursdays that makes Kit Sora exceptionally herself.
“I had trouble reaching 25 and realizing that I am so far behind where I thought I wanted to be. Then the more I thought about it, I realized I didn’t really want to be anywhere.”